When Cole was an infant, he was the chubbiest baby you ever saw.  We had a friend once make a joke about not knowing his eye color because his eyelids were so chubby you could hardly see his iris!  An entirely breastfed baby, he spent most of his baby and toddlerhood at the 90th percentile for weight and the 25th for length on his mothers grain and sugar filled milk. We spent our doctors’ visits filled with pride about our strong and healthy boy (90% is only 10% away from goal, right?). Little did we realize how quickly a chubby baby can turn into an overweight preschooler.  At three years-old his height and weight were unable to be plotted on the doctor’s BMI chart and we struggled with worry and fear that he may have a future filled with weight and health struggles similar to his mother’s.

At the same time, Cole was experiencing serious self-control issues, particularly, and most worrisome, around hurting his peers with very rough play. In fact, his preschool came very close to expelling him unless we were able to help him realize that his mind needed to connect with his body. It wasn’t that he was mean; it was that he literally was not able to make his body do what his mind desired because excitement or anger would take over before his mind could regulate his own behavior.

When we removed processed foods from his diet (including grains, sugar, legumes and dairy), we immediately saw an improvement in his self control and ability to listen to authority figures. He went from being a serious safety concern to being called “the best behaved student in school” almost overnight. Additionally, over the next year his weight remained steady while his height began to grow and he moved back onto the BMI chart and into a “normal” range.  Additionally, his exercise and winter asthma which required a daily inhaler no longer are needed at all. 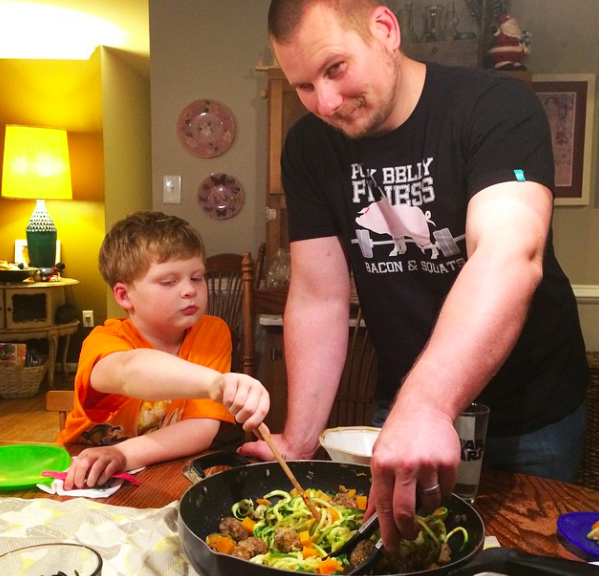 Cole is our inspiration – we love all our boys with all of our hearts, but seeing the changes in him has inspired us to make the time and effort to share our lessons with the world.  There is nothing more powerful than seeing your child struggling with every fiber of their being to behave and succeed in the world, only for it to be solved with some simple nutritional changes.  Now the most Paleo evangelist you’ll ever meet, Cole loves to preach the Paleo ways and informs his younger brothers, “You can’t eat that, it has wheat and dairy!”

For more on Cole, here is a list of his favorite things!

Get Healthy Inside & Out with our non-toxic living list, and we’ll send you better beauty samples of your choice! JOIN HERE

If you wanna get REAL! Our Real Everything e-mail for a weekly recap and and we’ll gift you our bestselling book, ELaD! JOIN HERE

Welcome! We're a foster resource family, with 4 teen & tweens, using lifestyle to manage autoimmune disease, ADD/ADHD, and eczema. Science nerds at heart, we don't have patience for anything fake, but do have a hunger for non-toxic healthy living, inside & out, and a boundless thirst for knowledge on everything from body love to comic books. We always keep it real: real beauty, talk, food & real life.

Clean Beauty Expirations: What to Use by When & Why

Switch to safer skincare with Stacy Toth and save 20%!Use the code CLEANFORALL20